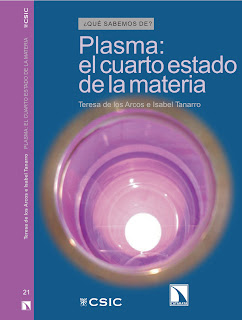 “Plasma: the fourth state of matter” is the title of a new book written by Teresa de los Arcos (Research Department Plasma with Complex Interactions) and Isabel Tanarro (Spanish National Research Council, CSIC). The book, in Spanish, is integrated within the collection “Qué sabemos de…?” (What do we know about…?) of the publishing house Catarata. The collection, written in collaboration with researchers from the CSIC, appeared with the goal of bringing the latest areas of research to a general, non specialized public. It covers topics that go from health to biotechnology, astrophysics, mathematics, and... plasma!
The book will also be officially presented (together with other titles of the series) in an act during the Madrid Book Fair on May 2nd, 2011.
Eingestellt von SFBTR87 um 15:25